After growing up dirt poor in a seedy Chicago neighborhood, Matt Tremont seemingly has it all now—brains, brawn, and billions. And most importantly, Noah, his five-year-old son, the one good outcome of a disastrous relationship that destroyed his last ounce of trust. The only thing he’s lacking is the perfect nanny for his son. And Ariana Jones is absolute perfection. Utterly enchanting. Completely fascinating. And totally off limits.

Like a match made in heaven, this is Ari's dream job. Swallowed up in the foster care system after losing her brother and mother, Ari has always dreamed of family. She showers five-year-old Noah with all the love she’s kept bottled up inside. Love she could also offer to her gorgeous billionaire boss—if only he weren’t the very last man she could ever hope to have.

But when sizzling sparks of attraction turn into a forbidden, sinfully hot night of pleasure, will Ari’s love be enough to make Matt forget the past and love fearlessly?

By the end of the first week, Matt was seriously concerned for his sanity.

Ari's scent lingered in a room after she’d left, tantalizing him. The upstairs hallway smelled like lavender bath salts, and he couldn’t erase the image of her naked in all that bubbling water. Story time with Noah had become torture, with beautiful Ari curled up in the wicker chair by the window, listening with rapt attention. He sometimes lost himself mid-sentence, unable to keep his eyes off her. Dinner was equally dangerous. She recited all the day’s activities, and he couldn’t remember a thing. Not when he was so drawn to the heat of her body, the glow of her hair, the sweetness of her skin, the way her mouth moved.

And how badly he wanted to taste her.

If Ari was just pretty, he’d get over it. Especially since her exuberance and her unconscious charm reminded him of his ex-wife when they first met. That should warn him off if nothing else did. Irene was like Holly Golightly in Breakfast at Tiffany’s—silly and carefree, always getting herself into trouble, but so sweet you couldn’t help forgiving her. Until one day you just couldn’t take anymore…because you realized you'd never be anything more to her than just another fun, and temporary, distraction. Irene had a bad habit of  flitting in every few weeks or months, showering Noah with extravagant gifts, then disappearing just as quickly, leaving behind a devastated little boy who couldn’t understand why his mommy always left him.

Matt couldn't help but feel that there was so much more to Ari, however. The questions she asked, the interest she showed in Noah, the way she listened to the bedtime stories, her gaze soft with adoration for his child. The fact that she wanted to talk to his son's teachers and find activities that would enhance his capabilities, to actually learn who Noah was as a person, was not only beyond anything any nanny had ever given—it was beyond what his son's own mother had given him.

And when Ari had told him that she would keep Noah safe, it felt like a promise. A vow.

“So how are things going with your new nanny?”

Matt started at Sebastian’s question. The Maverick Group headquarters were on the twenty-ninth floor of Sebastian’s high-rise in downtown San Francisco, and this was one of the rare occasions when they were all there at the same time.

“Ari’s great with Noah,” Matt said. “She’s takes him to interesting places, teaches him. I’ve never had a nanny so involved.”

“Sounds like she's got a lot of energy,” Evan said, leaning against the reception desk, arms folded over his chest. “Isn't she a lot younger than your previous nannies?”

They were spotlighting him, and he cursed the heat coursing through his body at the mention of her. She was a heck of a lot younger than him, she'd come out of a difficult past as a foster child—and, most important of all, she was off limits! Matt knew he had his head in all the wrong places.

“You’ve got a winner in Ariana.” Daniel sprawled in a leather chair, legs spread, hands on his knees. “Your home has got to be like a breath of fresh air for her.”

Matt was once again reminded of her scent. Which then reminded him of her nightly soak in the tub…and all the images that assailed him when he lay alone in the dark down the hall, unable to get her out of his head.

“She’s special,” Daniel went on. “She always took the new employees under her wing and showed them the ropes.”

“Then why did you let her go?” Will looked up from scrolling through his phone. “Jeremy keeps talking about how pretty she is, by the way. Sounds like he hasn't forgotten meeting her in San Jose when we were all rebuilding the youth home.”

“Don't talk about how pretty she is,” Daniel said through gritted teeth. “You’ll give this guy—” He thumbed at Matt. “—ideas.”

“Ideas are the further thing from my mind,” Matt lied.

A lie that he was afraid his closest friends might see through if they looked close enough.
Excerpt from Fearless In Love: The Maverick Billionaires #3, copyright 2016, Bella Andre 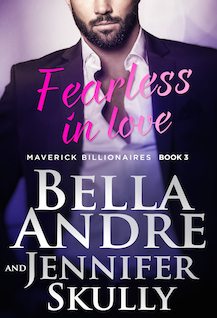