Snowflakes sparkled in Paige’s hair, the porch light danced in her eyes, and her breath puffed in wisps from her parted lips. Behind them, the muted sounds of merriment slid through the window panes, but out here they were in a world of their own.

His fingers still rested on her jacket. He couldn’t say how they’d come to stand so close. She’d been reaching for the snowflakes. He’d wanted to reach with her.

And something that was frozen inside him shifted toward her warmth.

He tried to make himself remember that she wasn’t only his soon-to-be ex-wife’s sister, she was also a good, honest, wonderful woman who deserved better than a man weighted down with all his baggage.

But the subtle perfume of her skin, her hair, and the succulent pink of her lips made it hard to give a damn about all the reasons he should keep his hands off her.

Lost in her chocolate eyes, he forgot who she was, forgot who he was. Beneath the night sky and the softly falling snow, they became two people without a history, without a past.

And with nothing between them but temptation.

The wind whipped up, and she leaned into him, close enough that he couldn’t resist stealing the kiss he’d craved for what seemed like forever.

Her lips against his were light as a feather, testing, teasing, giving. But when he ran his tongue along her bottom lip, coaxing her to open, to let him in, her sweetness invaded him, took him over, made him greedy to feed his growing hunger. She pressed her hands to his chest as he cupped her cheeks and crushed her mouth beneath his.

God. He couldn’t get enough of her taste, her heat, and the way she vibrated with need as she pressed her curves into him.

He groaned with need, intensifying the kiss, driving them deeper into sensation, passion, desire. Her hair was soft on the backs of his hands as he slid them down her shoulders, over her thick coat, to her waist, pulling her closer. She pushed her hands inside his jacket, her touch scorching him through his dress shirt.

He wanted nothing more than to drag her down to the deck, covering her with his body. Taking her. Filling her. Owning her.

Reality knocked him hard in the chest. He couldn’t love another woman, couldn’t risk giving his heart away to anyone ever again.

As he made himself draw back from her heat, her softness, the seductive pull of her mouth, he forcefully reminded himself how wrong this was. She was his sister-in-law—and they couldn’t kiss like this, consumed by each other, dying for more, the next touch, the next taste. And certainly not when he wasn’t even divorced yet. He needed to tell her that he was nowhere near ready to put himself out there for anyone. That he might never be again. That she deserved so much more than a few stolen, desperate kisses on a snowy night.

All he could get out was, “What are you doing to me?” Even though he already knew. She was turning his battered and bruised heart inside out. No matter how hard he tried to fight it or ignore it, Paige wasn’t afraid to get in his face and make him see the truth. Including the truth of his desire for her…

Before she could reply, the glass door slid open and Jeremy’s excited tones tripped down the stairs. “Look at the snow falling, you guys. Let’s go out and play!”

He grabbed Paige’s hand and pulled her with him down the stairs onto the snow-covered lawn, with Noah right behind them, dashing into the snow, his glee lighting up the yard. Harper and Will joined them a few moments later, then Ari, scooping up Noah and saying, “Let’s make a snow angel.” Ari called out to Matt, “Come on down and make your own snow angel.”

“I’ve already got two,” he replied as he joined them in the fresh powder.

Charlie and Sebastian jumped into the snow along with Lyssa. Susan made a snowball she threw at Daniel. The yard was full of love and laughter. At the head of the steps, Bob smiled indulgently. Even Francine had wheeled her walker outside, the lines of her face creased into a big smile.

But at the center of them all was Paige.

She tipped her head back and stuck out her tongue to catch the snowflakes, and when she laughed, the joyful sound sent another deep pang of longing through Evan. Snow powdered her hair, and the porch light morphed her into something ethereal, a beautiful fairy with white crystals melting on her tongue.

Exactly the way he’d melted into her. No matter how wrong it might be.
Excerpt from Irresistible In Love: The Maverick Billionaires #4, copyright 2017, Bella Andre 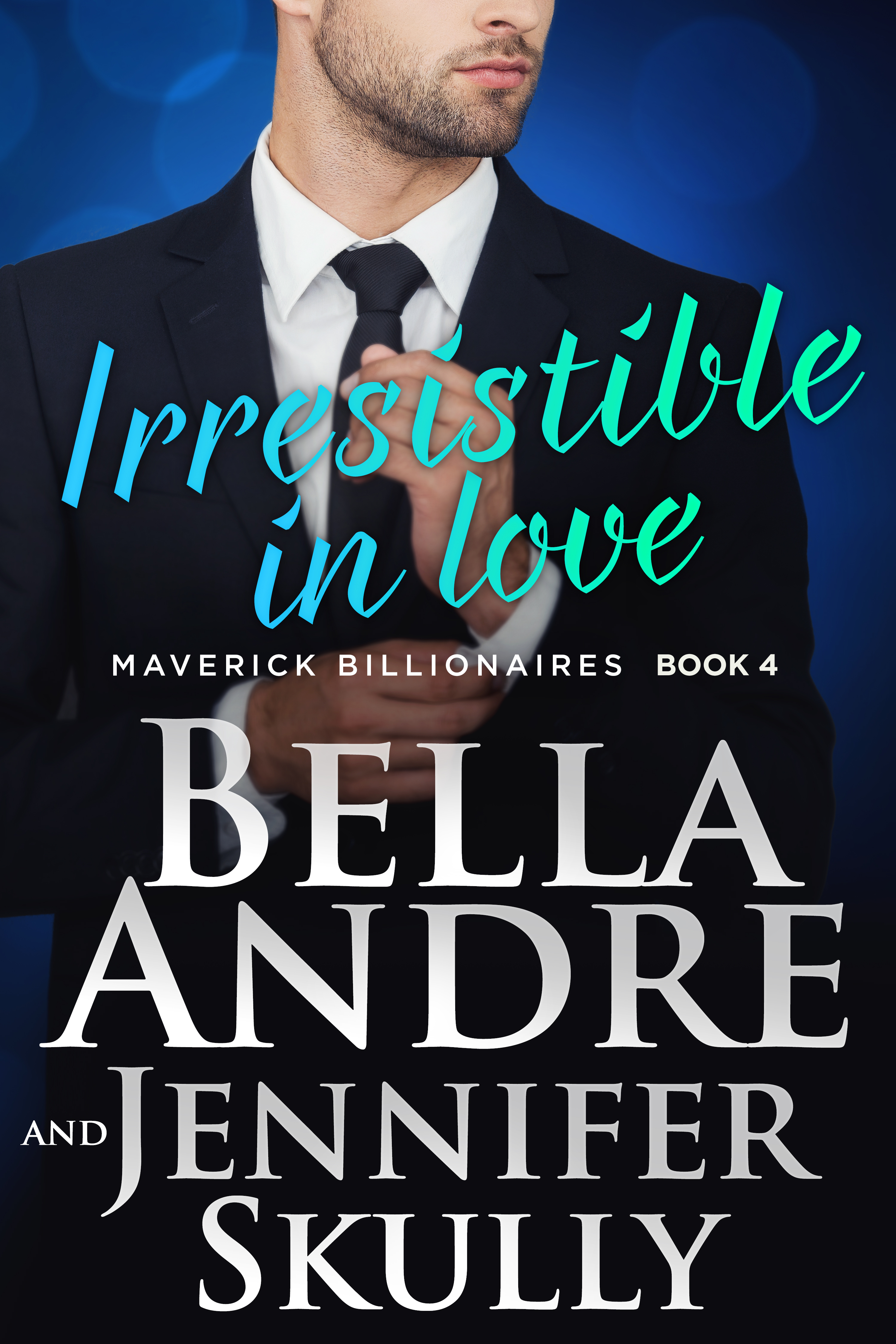