I Love How You Love Me

Please enjoy the following excerpt of I Love How You Love Me: The Sullivans® #13, copyright 2015, Bella Andre…

Two years ago, Dylan had been sailing in Belize when he’d looked up and seen a rogue wave come crashing toward him and his boat. He hadn’t stopped to think, hadn’t had time to be afraid, had simply done whatever he could to sail through what was later called the “storm of the century.” And he’d known that every second he’d spent in a sailboat during the past two decades had been to prepare him for that moment.

Seeing Grace and Mason for the first time had felt exactly the same way. He’d been working in his boathouse, enjoying the quiet and the physical labor, when he’d heard crying, and then the somewhat desperate murmur of a woman’s voice as she tried to calm the baby. The moment he’d stepped outside to make sure neither of them were hurt, and set eyes on the mother and child, his entire world had spun off its axis.

Desire for the woman—and his need to soothe the little boy—had come so fast that he hadn’t stopped to overthink or be afraid of what he was feeling. He’d simply reached out for the baby at the same time that he’d confirmed the little boy’s mother wasn’t wearing a wedding ring…and thought, I’m going to marry her.

Maybe he should have been surprised, but he wasn’t. Not when he’d always known that this would be how he’d love. All or nothing. And faster than a sloop flying over the water at twenty-five knots. All the years he’d spent watching his parents together, along with the way his cousins and siblings had found love these past few years, had prepared him well for this moment when he’d be hit by his own lightning bolt straight to the heart.

Dylan had never second-guessed himself. He’d always known he would be a sailor and build boats. There had been small struggles along the way, of course, but he’d never doubted his direction or his beliefs. So when he’d stepped close to Grace and the sparks between them practically exploded from nothing more than that, he’d barely been able to keep from sealing both their fates with a kiss.

But he hadn’t been raised to be an idiot. Which was why he wasn’t going to let himself pull her closer and kiss her.

Excerpt from I Love How You Love Me: The Sullivans® #13, copyright 2015, Bella Andre 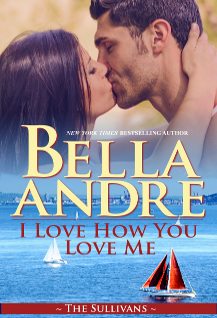