I Only Have Eyes For You

Please enjoy the following excerpt of I Only Have Eyes For You: The Sullivans® #4, copyright 2014, Bella Andre…

Sophie Sullivan, a librarian in San Francisco, was five years old when she fell head over heels in love with Jake McCann. Twenty years later, she’s convinced the notorious bad boy still sees her as the “nice” Sullivan twin. That is, when he bothers to look at her at all. But when they both get caught up in the magic of the first Sullivan wedding, she knows it’s long past time to do whatever it takes to make him see her for who she truly is…the woman who will love him forever.

Jake decided to steer completely clear of Sophie for the rest of the wedding. A little distance from all those soft curves and plump red lips would help him get his head back on straight.

“I’ve got this,” he told Sammy, one of his best bartenders at the original McCann’s in the city. “You can circulate with the trays.”

Fortunately, the wedding guests were thirsty, clearly needing some vino or hops to wash the taste of the syrupy vows from their tongues. Pouring drinks for strangers was as natural to Jake as breathing, and he immediately got into a rhythm in the middle of the vineyard as the meal was served and people kept a running line behind the bar between courses. He couldn’t remember a time he hadn’t been drying clean glasses, rearranging bottles. As a kid, when his dad had been the one running the taps, Jake had been in the back loading and unloading the dishwasher for a few extra bucks while the cooks at whatever pub they were at slung together plates of fish and chips and colcannon.

When the female guests flirted with him at the bar, he flirted back. So what if none of them were even half as pretty as Sophie? The Sullivans might be pairing up one after the other like they’d been infected by the same virus, but Jake had had his shots.

Love wasn’t going to take him down.

He knew better than to think that love meant a damn thing when the going got rough and it was easier to split. No wife, no kids, plenty of pretty women, but no rings, was what Jake’s future held. He’d play with all the kids the Sullivan clan was bound to pump out, would enjoy being Uncle Jake, but he wouldn’t make the mistake of thinking he’d ever be a good husband or father.

McCanns didn’t come with those genes.

“You haven’t had anything to eat yet.”

The slightly husky female voice reached in and grabbed him a split second before he looked straight into Sophie’s eyes. Her soft sensuality in that pink dress, the sweet smell of her perfume, were a one-two punch straight to a gut that hadn’t yet recovered from watching those tears slip down her cheeks, or the radiant smile that had followed.

Without waiting for an invitation, she put a full plate on the back table for him and moved around the bar to stand next to him. “Scoot over. I’ll help out while you eat.” She bumped her hip into his, his body not giving a damn that she was OFF LIMITS.

How could her brothers have let her out looking like this? What were they thinking? Didn’t they care even a little bit about their sister’s welfare?

While he was standing there losing his mind, Sophie took drink orders and deftly poured glasses of wine and mixed drinks for the wedding guests. She was a librarian, not a bartender. She shouldn’t be so good at serving drinks. And no librarian should ever be this hot, either, Jake thought as he clamped his jaw so tight his temple started throbbing. He’d let her help for five minutes, and then he’d send her back to her table to celebrate with the rest of her family and make sure she stayed there for the rest of the reception.

Even if he had to tie her to her seat.

A beer bottle nearly slipped from his grip as Jake was hit with a crystal-clear vision of Sophie in his bed, begging for him to—

“I hear you’re a librarian. Read any good books lately?”

Jake surfaced from his triple-X daydream just in time to notice a male guest leaning on the bar and looking down the top of Sophie’s dress.

She didn’t seem to notice any of that as she smiled back at the guy. She was too innocent to realize when a guy like this was aiming for one thing, and one thing only.

“Mmm,” she said in that seductive voice, still slightly hoarse from her tears. “I’m always reading great books. What do you like to read?”

The guy shrugged, not seeming to care that there was a huge backup of thirsty people bottlenecking behind him. “I’m a doct—”

“What are you drinking?” Jake broke in.

The guy shot him a look that said, Can’t you see I’m about to score here?

“Corona,” he said to Jake before turning back to Sophie. “As I was saying, I’m a doctor, so I don’t have too much time to read. But when I do, I usually read medical thrillers.”

Jake couldn’t believe it when Sophie leaned over the bar and said, “Oooh, how exciting. Medical thrillers always leave me breathless.”

Didn’t she get that this loser was way beneath her? She should be throwing a drink in his face, not giving him a better view of her body as she leaned down to grab a bottle of beer. Dr. Dickwad looked like he’d hit a home run, was counting the minutes until he could strip that dress from her tanned skin and find out if she tasted as good as she smelled.

Jake snatched the bottle from her hand. “Here’s your beer. Time to let everyone else get a drink.”

He could feel Sophie frowning at him as he pinned the guy with his hardest look. If she couldn’t pick good from bad, he was going to have to save her. Whether she wanted him to or not was irrelevant.

Although the guy flinched at Jake’s silent promise of violence, it didn’t stop him from saying, “Be sure to save a dance for me, gorgeous,” before he walked away.

Jake held on to his control by a very thin thread. Nothing would feel better than to jump over the bar and tackle the guy to teach him what happened when he flirted with the wrong girl. A girl who was too sweet, too pretty, too damn perfect for him to ever even think of touching one hair on her head.

“You’re not dancing with him,” he growled. “Not tonight. Not ever.”

Serving the customer always took priority. But not this time. “Sammy,” he called out across the reception area, motioning for his employee to take over the bar again. He didn’t wait for Sam to make it to the bar before wrapping his hand around Sophie’s wrist and pulling her out from behind the bar. He didn’t stop walking until they were hidden behind a large storage shed, just on the edge of the reception area.

“You are not getting within a hundred feet of that guy again.”

Anger flared in her eyes. Eyes that had been full of happy tears, full of pure joy, just a short while ago. “You can’t tell me what to do.”

She yanked her arm from his and started to walk away, but he couldn’t let her go. Not when she was bound to do something stupid, like kiss a smarmy doctor. Furious at the picture of anyone else touching Sophie, instead of just grabbing her wrist or her shoulders, this time Jake wrapped his arms all the way around her and pulled her into him. He held her tight, her chest pushing into his forearms, her height matching his so that her hips fit perfectly between his open legs, her soft hips pressing into his groin.

The word was muffled by her hair, so soft, so silky against his chin and lips. And the truth was, he couldn’t have let go of her for the world. Not just because he didn’t want that other guy touching her…but because he’d never wanted to hold anyone more than he did Sophie.

How long had he dreamed of holding her? Too many years to keep count. And yet, he’d never had a clue just how incredibly good she would feel in his arms, her dangerous curves pressed into him, her chest rising and falling against his arms.

“I’m not going to let you go until you promise me you’ll stay away from him.”

He shifted his hand enough to slip a finger beneath her chin and turn her face so that he could look into her eyes. “Promise me, Sophie. It’s for your own good.”

Sophie yanked her face away from his hand, then her whole body, and when she turned to face him head-on, her eyes were flashing. “I can’t believe you just said that! Especially since you of all people have no idea whatsoever what’s good for me.”

His mouth was on hers before he could put the brakes on his desire.

Excerpt of I Only Have Eyes For You: The Sullivans® #4, copyright 2014, Bella Andre 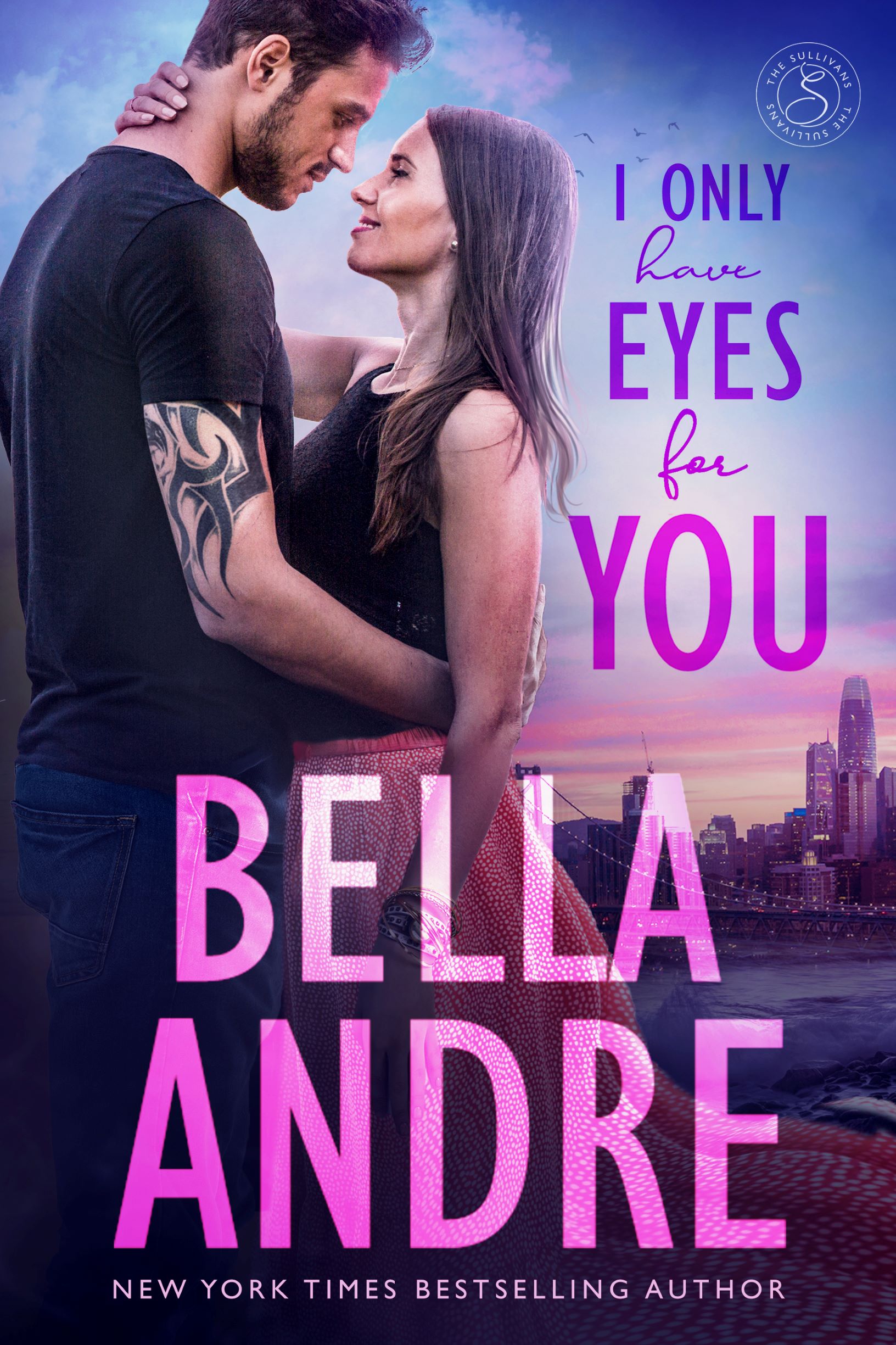