Let Me Be The One

Please enjoy the following excerpt of Let Me Be The One: The Sullivans® #6, copyright 2014, Bella Andre…

Ryan Sullivan threw his car keys to the valet as he shot past him. The young man’s eyes widened as he realized that he was not only about to drive a Ferrari into the underground parking lot, but that it belonged to one of his sports idols.

Ryan took his responsibilities to the fans seriously and made it a point never to let them down. But tonight the only thing that mattered was Vicki. Even though a half-dozen missed connections over the years had kept them from meeting up again in person after high school, they’d kept in touch through email and phone calls.

Vicki was his friend.

And he wouldn’t let anyone hurt one of his friends.

Ryan pushed through the dark glass doors to the exclusive hotel foyer and made himself stop long enough to do a quick scan of the glittering room. The Pacific Union Club wasn’t his kind of place—it was pretentious as all hell—and he hadn’t thought it would be Vicki’s usual stomping grounds, either.

So why was she here? And why hadn’t she told him she was finally coming back to Northern California after so many years in Europe?

He’d been hanging at his brother Chase’s new baby celebration when her texts had come in.

I need your help. Come quick.

Ryan had cursed every one of the thirty-five miles into the city from his mother’s house on the Peninsula. He’d texted Vicki again and again to get more information, and to make sure that she was okay, but she hadn’t replied.

He couldn’t remember the last time he’d been so worried about anyone…or so ready to do battle. Vicki wasn’t the kind of woman who cried wolf. She wouldn’t have sent him those texts just to try to get his attention. She was the only woman he’d ever known apart from his sisters and mother who had ever been completely real with him, and who didn’t want anything from him besides his friendship.

His large hands were tight fists as he surveyed the cocktail lounge, his jaw clenched tight.

Damn it, where was she?

If anyone had touched Vicki the wrong way, or hurt her even the slightest bit, Ryan would make them pay.

He was famous for being not only the winningest pitcher in the National Baseball League, but also one of the most laid-back. Very few people had a clue about Ryan’s hidden edges, but it wouldn’t take much more to set him off tonight.

He grabbed the first person in uniform, his grip hard enough on the young man’s upper arm that he winced. “Is there a private meeting room?”

His hand shook as he pointed. “On the back side of the bar, but it’s already reserved toni—”

Ryan hightailed it through the lounge and it shouldn’t have been that hard to get through the crowd, but it seemed that every single person in the room either got up to buy another drink or was trying to get his attention.

When he found a subtly hidden door just to the side of the bar, he nearly knocked it off its hinges in his hurry to open it.

Thank God, she was here, and in one piece.

But his relief was short-lived when he realized he’d interrupted her and her cocktail companion just as the man’s hand was sliding onto her thigh.

Vicki jumped off her seat as Ryan strode into the room. The terror that had been on her face when the other man touched her leg slowly morphed into relief at his arrival.

Her companion, on the other hand, was clearly surprised to see Ryan…and he wasn’t happy about it, either. The man was probably in his fifties and was obviously loaded. Or at least wanted people to think he was, holding meetings in a place like this, wearing a handmade suit.

Quickly conjuring up an expression of surprise, Vicki said, “What are you doing here so early, honey?”

Ryan made sure not to give away his surprise at Vicki’s greeting. Clearly, she needed to make it seem like they were an item, because the rich douche bag she was having a drink with in the private room had been hitting on her. And no wonder.

She’d been a pretty teenager, but now Vicki was everything he loved in a woman, wrapped up in one gorgeous package. Long hair that brushed over the swell of her breasts, the sweet curve of her hips from her waist, killer legs in high-heeled sandals.

Oh yes, the years had been good to his old friend. So good, in fact, that it didn’t take any acting ability whatsoever to reach for her hand and tug her into his arms.

“Sorry I’m early, baby. I could have sworn you said you’d be free by eight.”

God, she felt good. Warm and soft in all the right places. She smelled just as good, like flowers blooming in the sun mixed with the earthy hint of the clay she was always working with.

She was stiff for a moment in his arms before she seemed to remember that they were pretending they were an item. Her hands shifted around Ryan’s back, before settling in just above his hips.

“Thank you,” she whispered as she hugged him, before saying an even softer, “I’m sorry.”

Didn’t she know she didn’t have a damn thing to apologize for? She’d saved his life when they were kids. He still owed her for that, would owe her for the rest of their lives.

Pretending to be her boyfriend for one night wasn’t even close to paying her back.

Especially when it meant he finally got to live out his secret fantasy.

Six years after she’d moved away from Palo Alto, he’d headed out from California to New York City to surprise her at her college graduation. She hadn’t mentioned any guy in her life in the emails they frequently sent back and forth when they were supposed to be studying, so when he saw her walk into the graduation ceremony on the arm of an older man who had clearly claimed her, and she looked so happy and glowing, the jealousy and frustration almost flattened him.

He’d been too late again.

Ryan had left her graduation without ever letting her know he’d come and the next thing he knew there was a breathless voice mail from her saying that she’d eloped and was moving to France.

He couldn’t help feeling that he’d just lost something vital…even though he’d never had her as anything but a friend in the first place. For the next ten years, she’d lived all over Europe with her husband, and after her fairly recent divorce had settled in Prague. Ryan had been toying with a trip to see her at the end of the baseball season. Instead, she’d come to San Francisco. And he was damn glad about it.

As she pulled back from their hug, he threaded their fingers together. He’d seen enough of his brothers and sisters fall in love this past year to know how it was supposed to look.

Little kisses when they thought no one was looking…and even when they were.

“James, I’d like to you meet Ryan Sullivan. My b—” When she momentarily stumbled over the tag, he pulled her closer into him. “—boyfriend. Ryan, this is James Sedgwick. You know how I’ve told you that he’s one of the foremost authorities on modern art?” She gave Ryan a blinding smile that didn’t reach her eyes. “James and I have been discussing my latest project for the fellowship competition. He has some very constructive suggestions for me.”

“What can I get you to drink, Mr. Sullivan?” James gestured to the heavily laden glass table against the wall.

“Call me Ryan,” he said in as easy a voice as he could manage, given the fact that he wanted to pound James’s head into the marble tabletop. “A beer would go down great, thanks.”

“Of course. If you will excuse me for a moment.”

Ryan had counted on James needing to head out to the bar to get his drink. As soon as the creep left, he said, “What the hell is going on here, Vicki?”

She shook her head, looking too pale and worried for his peace of mind. “I’ll tell you everything later. Just keep playing along. Please.”

James returned seconds later and Vicki gulped from her wine glass as the man handed the beer bottle to Ryan with clear distaste. “The bartender assured me you wouldn’t need a glass. I must congratulate you on your record season, Ryan.” James turned his attention back to Vicki. “I’m surprised you didn’t tell me who your boyfriend was before now. I’m very…impressed.”

This time she didn’t stumble as she smoothly replied, “I didn’t realize you were a baseball fan, James.” She turned to Ryan and smiled. “I should know by now that everyone is a fan of yours, shouldn’t I?”

She said it with such affection that even Ryan found himself believing that they were a couple for a moment. It was pure instinct to gently smooth the pad of his thumb over the faint drop of wine left on the corner of her bottom lip.

Her eyes flashed with sudden heat at the unexpected touch, and he wanted to kiss her, needed to find out just how sweet she would taste. Telling himself it would help them look like an item in front of this guy, Ryan dipped his head and pressed his mouth to hers.

So many years he’d waited for this moment, and sweet Lord, if it wasn’t even better than he thought it would be. The surface of her lips tasted like red wine and sugar and all Ryan wanted was to deepen the kiss and keep kissing her for hours.

Excerpt from Let Me Be The One: The Sullivans® #6, copyright 2014, Bella Andre 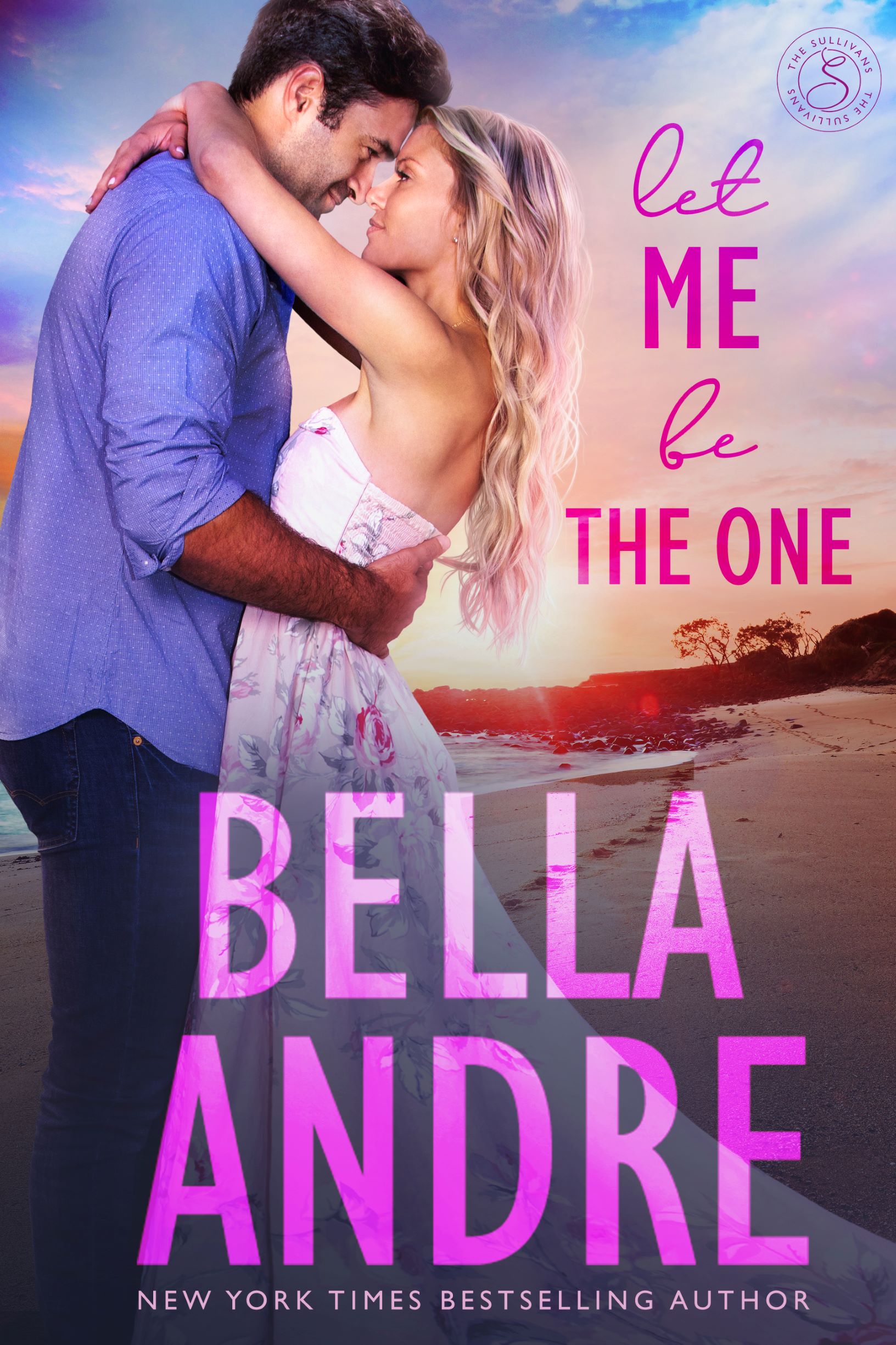