Sebastian Montgomery rose from nothing to become one of the most powerful media moguls in the world. Yet beneath the seemingly perfect façade of his life, the past still haunts him. Because when he lost his parents in his teens, he also lost his faith in love. When he discovers Charlie Ballard and her incredible metal sculptures, he is awed, inspired—and he can’t help feeling things he swore never to let himself feel again. Soon, Sebastian wants not only Charlie’s art, he wants her as a woman, too. More than he’s ever wanted anything in his life. And what a Maverick wants, he always gets…

For Charlie, Sebastian offers the commission of a lifetime. Creating a magnificent sculpture for his new headquarters is a dream come true, but falling for the spellbinding billionaire isn’t part of the plan… until his luscious kisses entice her into total recklessness. He fascinates and captivates her, and as Charlie learns more about the dark depths of Sebastian’s past, all she wants is to heal him with her love. But can a man who has grown up thinking love is toxic ever believe that true love is real?

“You want to commission me to design something?” Charlie Ballard sounded as though she couldn’t quite believe what he was saying.

Had no one ever let her know just how extraordinary she was before today?

“I’m planning a grand opening for the building, attended by friends, business associates, clients, customers, art enthusiasts. The fountain and its statue—the one you’re going to create for me—will be the centerpiece of the event.” Her work would be seen by everyone who was anyone in San Francisco and beyond. But it was more than her work that he wanted people to discover and appreciate. “We won’t just unveil your art, we’ll unveil you to the world too.”

Her lower lip moved, as if she was chewing herself on the inside. She didn’t jump at his offer. Didn’t do anything for long enough that he actually began to worry she might say no. Though he couldn’t understand why she would possibly turn down his offer.

“Well,” she finally said, “I am off school for summer break. Classes don’t start again until the fall.”

He eased closer, catching the perfume of woman and sparks. He wanted her art—and her—more than he’d ever wanted anything or anyone before in his life. “Is there anything else standing in your way?”

She paused again, her expression shifting in ways he couldn’t quite understand. There was excitement there, but also wariness and continued confusion. At last she said, “No, I guess not.”

Now that her mind was made up, she looked at him directly, her eyes glittering like emeralds. In an instant, the spark of desire lit between them again.

“What exactly did you have in mind?” she asked.

You. In my bed. For a month straight. Longer than that. For as long as I can convince you to stay.

But what he said instead was, “A stallion.”

The sweet and sultry sound of her laughter made it nearly impossible not to reach for her, to drag her into his arms and find out if her mouth tasted as sweet as it looked.

“Somehow that doesn’t surprise me.” She gave him a slow blink, then a sexy arch of her eyebrows. “Although I was thinking more in terms of a T-Rex.”

“A killer dinosaur?” His own laugh rumbled up. Only his fellow Mavericks could make him laugh so easily. But despite her baggy overalls and vast skills with power tools, she was worlds away from being one of the guys.

She pointed at the garage. “Didn’t you see my masterpiece inside?” She said the word masterpiece far too mockingly.

He spoke the absolute truth. “I only saw you.”

She stilled, blinked, and the afternoon heat wrapped around them, tugging him another step closer. So close that he could practically feel the heat radiating from her skin to his.

“You really should see the T-Rex.” She murmured the words as if they were talking about moonlit nights rather than a vicious dinosaur made out of all manner of sharp castoffs. “I’m building it out of road signs riddled with bullet holes. Battle-scarred, but alive and kicking despite its hunters.”

“They’re misunderstood,” she supplied simply. “But the truth is, even if you like him, I have to let your space speak to me first. And if you want me to build something for you—” She held his gaze, her finger just short of tapping his nose. “—you have to let the space choose what’s right.”

Charlie’s property clearly needed more than a new roof. But instead of rolling over like most artists who were desperate to sell their work, she wouldn’t be pushed. He was amazed that she appeared to be as open as her art—no artifice, nothing to hide. No smoke, no mirrors. Easygoing Charlie-not-Charlotte. And he found her more attractive than any glittering, cosmetically enhanced celebrity or society woman he’d ever dated. More intriguing.

“Deal. The space chooses the sculpture.” He reached for his checkbook, then pulled a pen from the pocket over his heart. He wrote the numbers, signed his name, and handed her the check.

She read, gripping the paper tightly between her fingers as if a sudden gust of wind might whip it away. But when she raised her eyes, her beautifully lush mouth was a flat line. “This is a joke.”

“I never joke about a hundred thousand dollars. I know that whatever you fill my empty space with will end up being worth more than that, Charlie.” As he held her gaze and said, “A hell of a lot more,” he wondered if she understood that he was talking about far more than her work.

Because something told Sebastian that Charlie just might be his destiny after all. 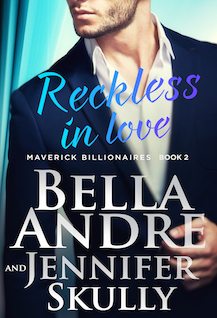