Please enjoy the following excerpt of Tempt Me Like This: The Morrisons #2, copyright 2016, Bella Andre…

As one of the biggest rock stars in the business, Drew Morrison can have anything—and anyone—he wants. Only Ashley Emmit, who has joined his tour to work on a college research project, is completely off-limits. Drew promised her father that, once the tour was over, he would send her home pure and untouched by the rock ’n’ roll world. But he has never been so tempted by anyone in his entire life. How is he going to make it through this tour without giving in to the urge to drag her into his arms and kiss her breathless?

Ashley has always lived by the rules. But from the moment she meets Drew, none of those rules make sense anymore. Not only does Drew’s music affect her deeply…but she’s never wanted to kiss anyone so badly. Not that a magnetic star like Drew would ever feel the same way about a brainiac like her, of course. And even if he did, she knows from painful experience that two people as different as they are simply don’t belong together.

But when the attraction between Drew and Ashley burns hotter every moment they’re together on the tour bus—and they begin to share their deeply hidden and emotional secrets—will either of them be able to resist temptation? Or could giving in to their feelings lead them straight toward a love they never saw coming…

Holy hell, she was pretty.

The first time Ashley had come backstage to introduce herself at a previous show, Drew had been knocked over by her beauty. But his memory hadn’t done her justice. Hadn’t even come close.

Her wavy brunette locks were streaked with sun-kissed strands. Her skin was so soft-looking and creamy that when she flushed every time he looked at or spoke to her, he found he could barely keep his hands off her. He wanted to stroke her cheek with his fingertips, wanted to know if her mouth tasted as good as it looked. Because something told him it definitely would. She wasn’t tall, wasn’t little either, and was just curvy enough to make him drool. In her black jeans and long-sleeved shirt, she managed to be a gorgeous combination of sweet and sexy. Although he wondered if she had any idea at all of just how sexy she was.

None of the girls shoving their breasts in his face before or after the show tonight held a candle to her. Ashley Emmit was simply perfect.

But she could never be his. Not one beautiful inch of her.

“Take care of my baby.” Drew could hear her father’s words as clearly as if the man had been standing in front of him right now. They’d spoken on the phone that morning, and the professor he’d had for statistics at Stanford three years ago couldn’t have been clearer. “Don’t let anything happen to her. She’s the whole world to me.”

“You have my word,” Drew had promised.

With two younger sisters—Olivia was going to start a graduate program in education at Stanford in the fall, while Madison would be going into her freshman year, also at Stanford—Drew knew all about protecting the people he loved. He’d do anything for his family, give up anything for them if it would keep them safe.

“I wouldn’t let her go on tour with anyone else, Drew.” Dr. Emmit had clearly wanted to hammer his point home. “Just you. After having had you as one of my students, I know you and trust you.”

So even though Drew was probably going to deplete the bus’s cold-water storage tank with the copious number of freezing showers he would need to take, it was why Ashley was traveling on his bus. Normally, he traveled solo so that he could write and record without disturbing anyone else. But not only was he not doing any writing or recording lately, he needed to make sure she stayed safe.

The guys in his band and on his crew were great, but they were still guys who were sure to think she was just as pretty as Drew did…and who hadn’t made any vows to his professor. He’d already told them all that she was off-limits, but as soon as they turned in for the night, he’d send a text out to everyone to remind them that if they so much as looked at her wrong, they’d have to answer to him. And there would be no second chances where Ashley was concerned.

As pure as she’d come onto his tour, she was going to leave the same way.

Drew got himself a beer and poured her the glass of wine she finally requested in a near whisper. He was used to making girls nervous. It had happened to him and his brothers ever since they were kids. In first grade, he’d gone up to ask Jennie Leland if he could share her crayons, and her eyes had gotten real big right before she’d dropped the crayons on the floor. She’d pretty much hidden from him for the rest of the school year.

But he didn’t want Ashley to feel she needed to hide from him. Even if he needed to keep his hands and mouth—and every other part of himself—from touching her, he still wanted her to get what she needed out of this tour. Not only because he felt he owed it to her father, who had been a great teacher, but also because after only a handful of minutes he already liked her.

He could do this, damn it. He could do his favorite professor a favor, could be a platonic friend to Ashley, and all would end well.

But did she realize she was close enough for him to kiss her? Or just how badly he was dying to taste her skin? Her eyes were the most extraordinary color, amber with flecks of green and blue, and he couldn’t stop staring into them, mesmerized.

Already, Drew was less than a heartbeat from breaking his vow not to kiss her.

Excerpt from Tempt Me Like This: The Morrisons #2, copyright 2016, Bella Andre 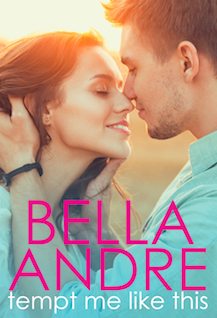