Please enjoy the following excerpt of Be My Love: The Walker Island Series #1, copyright 2015, Lucy Kevin…

Joel didn’t have time to straighten his tie before a woman pushed open the door to his office. Small and fine-boned, she was incredibly beautiful, albeit in a slightly unconventional way. Her blonde hair was streaked with light pink highlights, and her eyes shone out, blue and fierce from beneath her bangs. Even in cargo pants and a denim jacket it was obvious that she had a gorgeous figure.

As a high school quarterback, the son of the local shipping magnate, and then the director of the family business, Joel had had his share of relationships with good looking women. But there was something uniquely attractive about the way this woman strode over to his desk like nothing in the world was going to stop her from getting what she wanted.

Of course, by that point, two other things had become pretty obvious, both of which should have dampened the attraction Joel had felt in that first glance. The first was that she was probably only in her early twenties, which was far too young for him. But it was the second that was far more important.

She was a Walker.

She might have been the youngest Walker sister, but she was no longer a little girl. Not even close.

“Oh, wow,” she said, her eyes widening as she stopped moving closer to stare at him. “You would look just great on camera.”

“You recognized me.” She sounded surprised. “I wasn’t sure you would. I’ve grown up.”

Yes, he thought, you certainly have. This close, he could smell the fresh scent of the sea on her and guessed that she must have only just come over on the ferry. He knew she was here to convince him to let her into the archives, but just looking at her beautiful face scrambled up his brain cells so badly that before he could put them back in order and let her know he wasn’t going to change his mind, she was moving closer…and scrambling his insides up more and more with every step she took.

“I just spoke to Mr. Neale, who told me that you’d said I couldn’t have access to the archives, but I figured that couldn’t be right. I mean, why would you do that? And since he’s very busy with everyone who wants ice cream today, I thought I’d come here and talk to you directly. And you know, you really would look great on camera. Maybe we could do a segment in the documentary with you talking about how the Peterson family is doing now, a couple of generations after the big feud? And we could also include a few shots of mussel farming, because though I know it isn’t totally relevant to our families’ stories, it is a really big part of the island culture and industry.” Barely pausing for breath, she added, “So if you could let Mr. Neale know it was just a slight mix up, that would be great. And it would be even better if you could talk to him today, because I need to get to work on my documentary immediately so that I can edit it together and submit it before the end of the summer.”

Joel was, frankly, stunned by Hanna’s passion. He’d hoped that her interest in the Walker-Peterson feud would be fleeting. But as she began to move even closer—close enough that he could smell the lavender scent of her shampoo in addition to the sea spray on her skin—he realized he had to stop this here and now. All of this.

“There is no mix up.” He pushed away from his desk, and made himself move across the room, away from all of her incredible beauty and passion. “I’m not going to give you access to the historical archives.”

How, he wondered, could she be this genuinely surprised by his response? “Hasn’t your grandmother told you why?”

For the first time since entering his office, she looked a little unsure. “I haven’t told Grams about it quite yet,” Hanna admitted. “The interview with her will be one of the main features of the documentary, and if I told her what I was doing too soon, it might spoil her natural reaction. It’s really important with documentaries to get people’s real reactions.”

“Oh, trust me,” Joel told her, “once you bring this up with your grandmother, you’ll get a real reaction. Surely, you know the details of the island scandal, don’t you?” Details of a feud that had been drummed into Joel’s head from as far back as he could remember.

“Some of them,” she replied, “although I won’t know everything until I’ve had a chance to look through the archives properly.”

“No,” he said again. “And once you speak with your grandmother, I’m certain you’ll understand why I can’t support your documentary project.”

Before Hanna could try to argue her case again, Margaret opened the door. “Joel, Frank Williams is here for your meeting. Do you need him to wait a few minutes?”

Hanna spoke first. “No, that’s okay. I need to go let my family know I’m back home.” Scrupulously polite now, and in direct contrast to the way she had barged in earlier, she said, “Thank you for your time, Joel.”

When she turned and walked out with her spine straight and her head held high, Joel couldn’t help but admire her beauty yet again. Working to shake her vibrant image out of his head as he shook hands with the head of the Mussel Farmers’ Union, Joel did his best to focus on the meeting so that he could understand the changes they wanted. But all the while his brain was somewhere else entirely.

Excerpt from Be My Love: The Walker Island Series#1, copyright 2015, Lucy Kevin 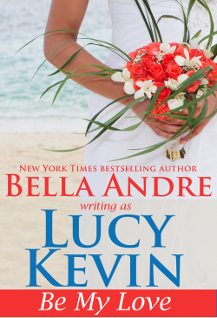