Please enjoy the following excerpt of When It's Love: The Walker Island Series #3, copyright 2016, Lucy Kevin…

Nicholas quickly tied the surfboard into place on the roof of Rachel's car with some bungee cords and rope that he pulled out of his bag. While he worked, she thought about all the places he must have been with this surfboard. Hawaii, Brazil and hundreds of beaches around the world. Places she’d always wanted to go…but once she had Charlotte, traveling to new places, and seeking out new adventures, wasn't at the top of her list anymore. Not even close.

“That should be secure enough,” he said as he finally stepped back from the car. “I know you're anxious to pick up your daughter.”

“How quickly can I drive without worrying that it will slide off?”

“We should be just fine. Unless you're planning on doing some white-knuckle stunt driving,” he teased.

Rachel was surprised that he would even suggest that about her. Didn't he see what everyone else did? The staid and steady single mom. The woman who did the right thing—the safe thing—all the time.

Or was it possible that he could see the glimmer of the girl she used to be? Wild…and more than a little unruly and adventurous.

Shaking off her thoughts of the past, she got into the car and buckled up, waiting until Nicholas did the same before setting off through town.

As they made their way up along one of the winding roads, Nicholas said, “Walker Island looks like a really great place.”

“It's a fairly quiet island,” she said, already distracted enough by trying to concentrate on the road rather than on the gorgeous profile of the man sitting next to her without trying to make sparkling conversation, too. Did Nicholas have to go around being that good-looking? Rachel knew all too well just how many accidents were caused every year by distracted driving.

“Something tells me,” he replied in a deep voice that made her more than a little melty in all the places she hadn't so much as felt warm these past few years, “that things will be exciting enough for me here, even if I don't parachute out of a helicopter the way one of the TV producers was suggesting.”

Excerpt from When It's Love: The Walker Island Series #3, copyright 2016, Lucy Kevin 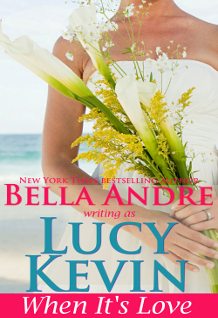